Drivers Age 25-39 Admit To Most Texting While Driving

Drivers Age 25-39 Admit To Most Texting While Driving

Texting while driving is illegal in Florida and 40 other states, but does that mean people are following the law? It’s an old trope about teenagers; how rebellious they are, how they like to push the limit, etc. 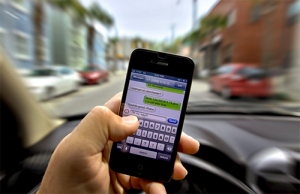 Well, it turns out that behavior translates to on the road, where teenagers are willfully ignoring the law and practicing distracted driving. It’s not just Florida, either. But perhaps the most shocking news? It’s not teenagers that are the biggest offenders. No—it’s the age bracket of people from 25 to 39—grown adults who are actually the guiltiest of texting while driving.

A new survey shows that 26% of drivers admitted to sending an email or text while driving. Not only that, but drivers in the 25 to 39 year old age bracket racked up 45%– that’s nearly half of that bracket using their phone to text or send an email while operating a motor vehicle. Of that, 10% said that they do this fairly often.

The same bracket of 25 to 39 year olds weren’t just offenders with texting. They were also the most likely bracket to talk on a handheld cell phone while driving—82% of this age group admitted that they had done just that in the past month, with roughly half of the same group saying they did it often. With distracted driving taking thousands of lives every year—the distracted drivers and those of innocent drivers who happened to be unfortunate enough to come into contact with them.

The runners up for texting while driving were ages 19 to 24, with drivers 16 to 18 years of age surprisingly the third most likely. While drivers that were 75 years or older were in the group least likely to text, 1% copped to texting while driving and nearly a third said they had talked on a handheld cell phone while driving in the last month. No matter what age group you’re in, there’s someone doing it.

660,000 drivers in the United States are using cell phones or electronic devices while driving at any time during the day. 10% of all fatal car crashes are a result of distraction. The math is devastating. Do not text or talk on a phone while driving. You could not only incur steep fines, you could also lose your life. According to AAA, using a phone while driving makes your odds of being in a car accident multiply by four. Using hands free tech can be just as distracting as or even more so than texting or talking on the phone. Try focusing on driving while you’re on the road and you’ll be far less likely to require the services of an experienced car accident lawyer.

Remember to drive safe. If you do get into an accident and want to know your options, contact an experienced car accident lawyer today.