May is one of the most dangerous seasons out of the entire year when it comes to motorcycles. Cyclists are especially prominent on the roads as the weather gets nicer and nicer. More motorcycles on the road means more interaction with other vehicles on the road. This is significant, as passenger vehicles and trucks are involved in most motorcycle accidents, with a number of drivers often saying that they never even saw the motorcyclist prior to the accident.

That’s why the National Highway Traffic 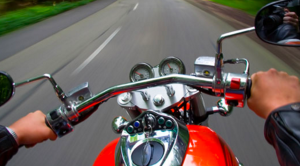 Safety Administration (NHTSA) is paying special attention to the issue in Motorcycle Safety Awareness Month in May. The national initiative encourages drivers and motorcyclists to keep an eye out for each other as well as share the road. Motorcyles may be small, but they have the same rights on the road as every other vehicle and should be kept a safe distance from when in traffic. Cyclists do not have the advantage of a shell or frame around their body as four wheel drivers do, so it is even more important to keep an eye out for them and give them their space.

Wear a helmet and protective gear.
A full-face helmet is best, but any helmet is better than no helmet. The head is a very important part of your system, and a cyclist in a crash without a helmet is 40% more likely to suffer a trauma to the head that is fatal. It’s vital that you gear up to protect yourself if you’re going to hit the road. It’s smart to be safe, and odds are that it’s mandatory depending on the state you’re riding in.

Ride when rested.
Don’t drive when you’re emotional, angry, or on very little sleep. You want to ride well rested so that you have a much better shot at making good judgment calls and avoiding accidents.

Look in the side mirrors.
A car’s side mirrors let you see the eyes of the driver sometimes, which indicates that you are not in their blind spot. If you can’t see the driver, you may be in their blind spot— meaning that they have no idea that you’re there. Any driving decision will leave you vulnerable and likely to be seriously harmed, so avoid this if you can.

Don’t drive in bad weather.
Bad weather equals higher risk of getting in an accident. Avoid it if you can.

If you’ve been injured in an accident and wish to consult an experienced motorcycle accident lawyer, contact The Law Offices of Payas, Payas and Payas today.